The Apogee One is the perfect way to turn your Mac laptop into a state of the art recording tool. The compact and ultra-portable pre-amp microphone records audio to your MacBook, MacBook Pro, or MacBook Air when you're on the go. Apogee's next-generation AD/DA converters deliver amazing, transparent-sounding audio. While the die-cast aluminum body ensures that the One will survive the abuse of the road. Think of the ONE for Mac as a stepping stone to greatness while you are on the road.

The ONE's sleek design and plug n play attitude makes it easy for anyone to transform their Mac to a live recording studio that is constantly on the move. Versatile and sturdy the ONE will stand up to what ever you throw at it. Enjoy the delivery of quality sound where ever you are with the Apogee ONE for Mac. System Requirements:.

The Apogee One includes everything one needs to start recording pristine audio tracks with one powerful, compact interface. When it came out four years ago, the Apogee One delighted us in several ways. Elegant and compact, it established itself as one of the best audio Swiss knives to use with a MacBook to do some music or a podcast while traveling light. Apogee One for iPad & Mac Review + Apogee ONE for iPad & Mac. ONE for iPad & Mac, USB audio interface from.

Is a 2 IN 2 OUT USB audio interface with a built-in microphone for Mac and now iOS, too. This means you can plug the interface into your Mac or straight into your iPhone or iPad (via Apple's newer Lightning connector or the legacy 30-pin dock connector) to record audio. The ONE's built-in microphone means that you can get to recording straight away, without the need for additional cables or mics. Apogee is a name synonymous with high quality mic preamps, AD/DA converters and clocking found in its high-end studio products, like the.

These products are used by professional musicians and studio engineers around the world. Does the ONE live up to the renowned name and reputation of Apogee?

Read on to find out. Hardware The revamped ONE (2013) replaces Apogee's first generation ONE (2009), which had just the single input and was not compatible with iOS devices. The original ONE was USB 1.1 compatible, Mac: bus powered, had a 24 bit, 44.1/48kHz sample rate and cost US$249. The new ONE beats its predecessor in all aspects, except price - it'll cost you a $100 more. Aside from that, it offers low-latency USB 2 speeds, it's DC mains or battery powered (in addition to Mac: bus powering) and, finally, the new ONE has a 24 bit, up to 96kHz sample rate. The ONE is constructed with a die-cast aluminum body, which feels strong and sturdy.

It's not heavy, and it's not particularly large (though taller than the original ONE), which is a good thing since it's intended to be extremely portable. The molded rubber base doesn't allow the ONE to go slipping off of surfaces either.

There's just a single, large dial on the front of the ONE, which is used to operate all aspects of the device, though all operations can be carried out via Apogee's Maestro app for Mac and iOS, too. Above the dial is an LED input / output level meter and above that an LED input / output indicator (internal mic, external mic, instrument and volume).

When using the ONE's built-in mic, it was particularly useful to have the level meter on the front of the device to reference input levels, instead of looking to my Mac or iOS device to see if things were peaking or too low. On the top of the device is a microphone / instrument input (expandable via breakout cable), a micro USB input (to connect to a Mac or iOS device) and a DC power input. All cables and the power supply are included with the ONE. The bottom side of the device has a 1/8' stereo output for headphones or powered speakers.

The ONE's breakout cable gives you a 1/4″ instrument IN and an XLR IN. The devices allows you to have 2 simultaneous inputs: the instrument IN and the XLR mic IN or the built-in mic with the instrument IN. Of course, you can just use the ONE's built-in mic without the breakout cable attached. On the rear of the device is a battery compartment for two AA batteries, though these were not included. Powering the ONE with batteries eliminates the power supply from the mix when using the ONE with an iOS device, which dramatically adds to its practicality in a portable context. One glaring omission is MIDI input, especially for a device that's iOS compatible. With so many apps designed for MIDI use on iOS, it feels like the ONE's missing a trick.

Performance on iOS Connecting the ONE to my iPad was just as easy as connecting it to my Mac. However, the first hurdle was power. IPads and iPhones won't power the ONE like a Mac does, so I opted to use the included power supply (though I could have gone for the battery option had I any to hand). On the plus side, using the power supply with the ONE meant that my iPad was charging instead of draining away. The next step was downloading, which is required for Mac as well.

The app allows you to control all features of the ONE as well as improving latency issues. Once Maestro was installed, I launched GarageBand and got to adjusting settings. It took me a little while to get a good level because I was unfamiliar with the Maestro app. I found myself repeatedly switching between and Maestro, trying to get a level that didn't peak, but wasn't too quiet. I found this process cumbersome, but once I was a bit more familiar with Maestro, things seemed to improve. That being said, The Maestro app does feel like a bit of a third wheel. The interface is akin to its desktop counterpart.

Although that may be a comfort to those who've used it on the Mac, it doesn't feel at home on iOS. Buttons and sliders are small, for example, particularly on the iPhone. It's still workable, but a Maestro app designed solely with iOS users in mind would go a long way to improving the experience. Performance on OS X Really, there's not much to say here. If you've used an Apogee interface with a Mac, you know it's a solid combination. The ONE felt right at home with my Mac. I can't put my finger on it - maybe it was simply familiarity - but everything worked as you'd expect it to.

The Maestro app is still required, but it does fit much better in place on OS X than iOS. Results Once I got to some recording, I was really surprised with the results. Using a, I found I was getting some fantastic results for the first time on my iPad.

Similarly, things sounded great on OS X running. But for me, the big surprise was actually the ONE's built-in microphone.

It admirably handled whatever I threw at it. Once I realized how compelling the built-in mic was, the ONE began to make sense to me.

You see, there are many external mics for iOS out there, but the ONE's mic in combination with Apogee-designed preamps and digital audio converters makes it a compelling package for recording audio on iOS (or Mac). You really can just plug in and record. There's no need for additional cables or mics. And you do get a fantastic sound out of it. Conclusion Plugging the ONE straight into my Mac and putting something down at a moments notice is a real plus, especially when the quality of the audio sounds this good. More so, for those moments where it's easier to grab your iPhone or iPad, the ONE produces the same results. The revamped ONE carries Apogee's name well.

Apogee One For Windows 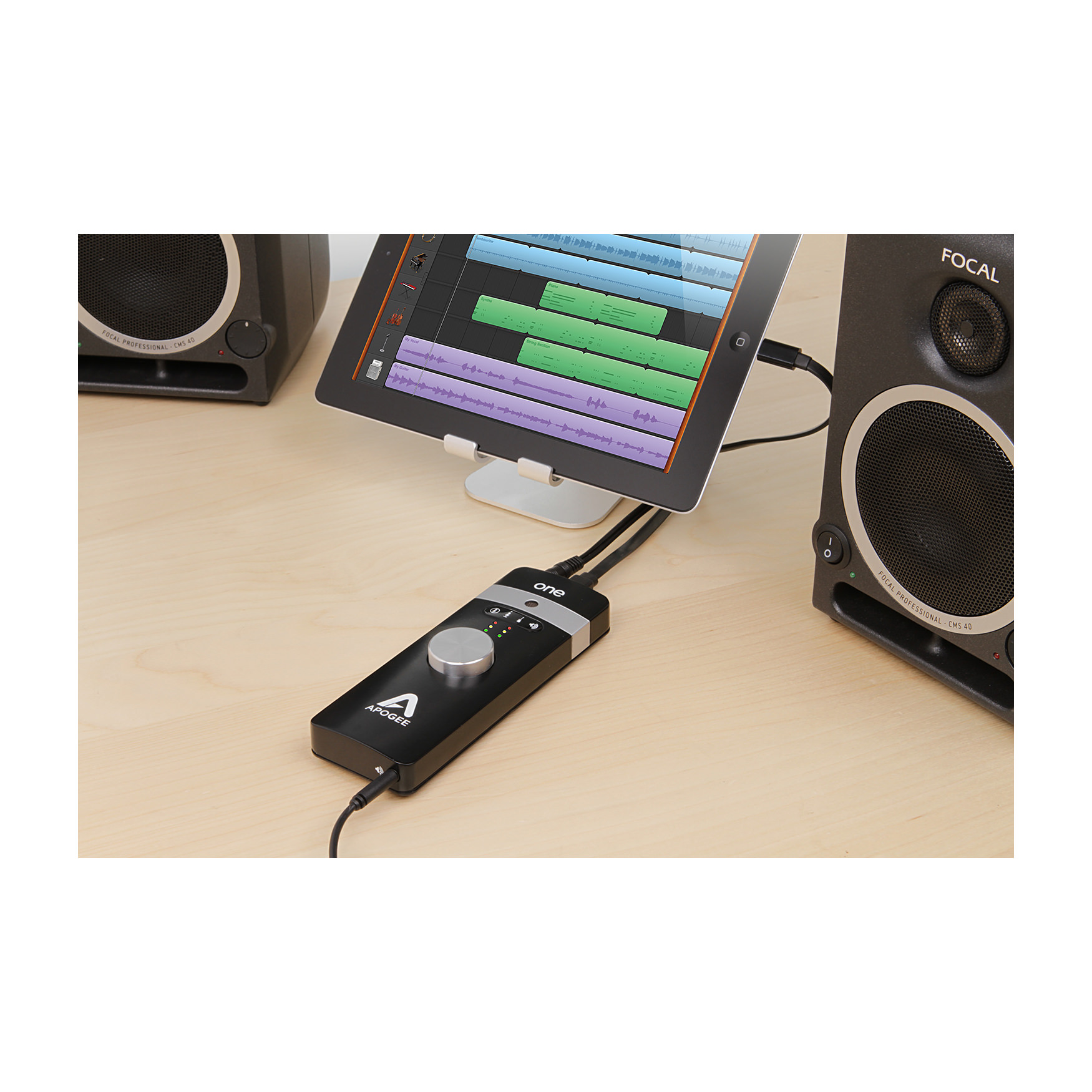 For its class, it's got stand-out preamps and converters and a built-in mic that really impresses, with expandability if you need it. And all of this in a highly compact and portable form factor. If you're looking for that kind of convenience, but without skimping on quality, the ONE is a solid choice.