Jan 6, 2011 - BrothersoftEditor: Citrix ICA Client is an ICA Client developed specifically for the Mac OS X operating system, providing native connectivity to. CTX200326 - Additional Lifecycle Information for Receiver for Mac. CTX115717 – Replacement Information for Citrix Presentation Server Client Private Releases Later Than Version 10.200. For the latest available list of Citrix Receiver and Plug-ins, click here. Citrix Support. STUN Client and Server library is a free software tool that implements a simple STUN Server and Client on Windows, Linux, and Solaris.A STUN Client can execute on an end system, such as a user's PC, or can run in a network element, such as a conferencing Server.

Seriously, the article I wrote Friday about the seemed to create more confusion than it solved about all the names and versions of the various Citrix ICA clients. I spent some time digging today and I think I've sorted out all the different names, packages, and versions of the Citrix ICA client software. (Unfortunately I haven't sorted out the 'why' yet.) The ICA Client This is the original name of the client software that seemed to work fine for ten years. If we were scientists, this would be our 'control.' Historically there were Program Neighborhood, Program Neighborhood Agent, and Web packages available.

You could use any of the three packages to connect to seamless published apps or to full desktops. The XenApp Plugin This is the new (current) name for the ICA client. Like the previous versions, there's a regular package and a web package, as well as EXE and MSI editions available. The main question with this client is 'plug-in to what?' The XenApp Plugin MSI is a standalong package that you just install. As far as I can tell, this is just the new name for Version 11 of the normal ICA client.

The Receiver itself doesn't actually do anything except provide a way for admins to centrally configure, manage, and update all the various pieces that need to be installed on a client device. The 'server' component that goes along with the Receiver to manage it on the back-end is the Citrix Merchandising Server. Online App Plugin Supposedly this is an actual 'plug in' for the Citrix Receiver that gives it access to online apps via the ICA protocol.

My guess is that Citrix's decision to only support the 11.1.1 client as an actual 'plug in' to the Citrix Receiver is temporary, and eventually there will only be a single ICA client that can be used on its own or plugged into a Receiver. (After all, Citrix has to have some support for people to connect to apps without forcing them to build a Merchandising Server.) Dazzle This is that that makes finding and running applications fun!

Think of it almost like a 'skin' for the Receiver. You'll control Dazzle with the Merchandising Server along with the Receiver. Desktop Receiver Do not confuse this 'Desktop Receiver' with the 'Citrix Receiver' because they're in no way related. The 'Desktop Receiver' is a fancy name for the normal ICA client software that has a special look-and-feel geared towards connecting to remote desktops instead of single published seamless applications. Citrix intends for this to be used with XenDesktop full desktop sessions, although really there's nothing stopping you from using the Desktop Receiver client with Terminal Server-based XenApp published desktops. So why bother creating a dedicated ICA client for full desktops when the normal ICA client has worked fine for years?

The main reason is because if you run a remote desktop session full screen, you end up hiding your local start menu and desktop and stuff, and it can be kind of confusing to users. So Citrix took a hint from Microsoft and added that pull-down pin menu thing to the top of the screen to make it easier to switch between the full-screen remote desktop and a local desktop.

(In a sense, it's used when you want to convert a fat PC into a thin client, err, 'desktop appliance.' ) So really the full version of the Desktop Receiver and the Embedded version of the Desktop Receiver are about 99% identical, but the embedded version only supports full-screen mode for the remote desktop connections, it only supports one single remote session, and it doesn't have the cool toolbars for switching between local and remote desktops. 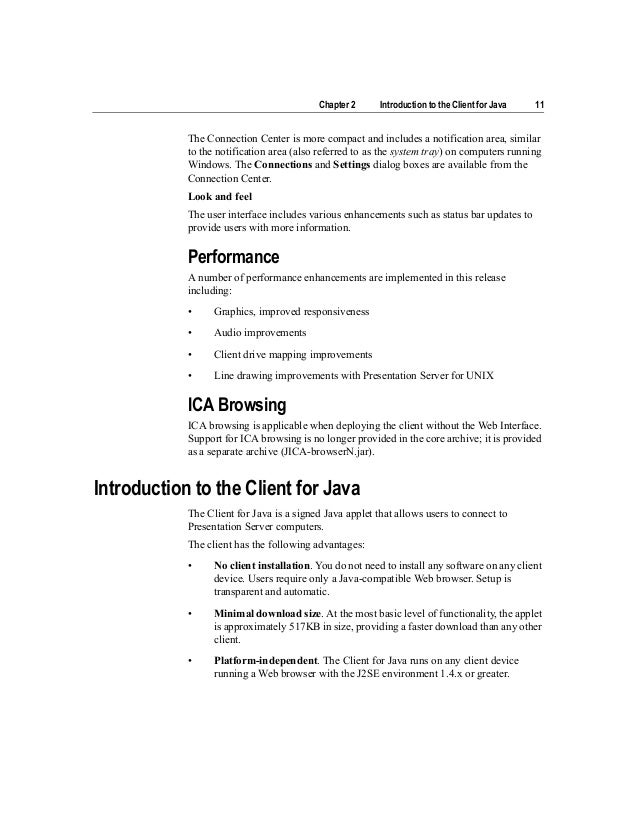 (The embedded desktop receiver is still a Windows app though. So you still need a DOMAIN-JOINED Windows OS on the client.) You can also configure the Embedded Desktop Receiver with the address of the Desktop Broker, so the user can login and get their desktop immediately without having to use Web Interface or anything. The concept of having two different full desktop clients-one that is remote desktop only and one that also allows interaction with local apps-is fairly brilliant and handled in an elegant way by Citrix. The only stupid thing they did was in the naming. (Again, the 'HEY LET'S GIVE ALL OUR PRODUCTS THE SAME NAME problem they've had in the past.) So there you have it. One protocol.

One client platform (Windows). Seven client choices. Why do people legally change their names? Either they had a terrible name or they want people to have a much inflated view of them. This seems to be true of products as well. Reminds me of Homer changing his name to 'Max Power'.

A name gives an initial impression. The judgments come after later impressions. If the name is overinflated, the user/admin loses faith.

Personally, I don't mind name changes from time to time. I do have a problem with products that do not live up to their names/descriptions. It is a classic clash between how marketing and engineering works.

Marketing wants to put forth the best image for the product. Engineering wants to build the best overall product.

Both have to align before the product will succeed. Add My Comment.