But I also have a couple of programs that handle sysex for specific hardware synthesizers (including the Micro Q and the Andromeda), which are difficult to be without. These are Windows-only apps with no Mac equivalent, so I'm trying to find a sysex app that's not specific to a single type of hardware.

Switching my audio setup to the Mac platform has not been without problems. I'm slowly getting over the unavailability of Sound Forge. And I've tried to convince myself that the incompatibility of all my old VST plugins is a chance to start over with a clean slate. But I also have a couple of programs that handle sysex for specific hardware synthesizers (including the Micro Q and the Andromeda), which are difficult to be without. These are Windows-only apps with no Mac equivalent, so I'm trying to find a sysex app that's not specific to a single type of hardware. I have tried using Sysex Librarian for the Mac and every time I send a patch to the Andromeda, it locks up.

When I restart it, nothing loads – I think the user memory gets corrupted. I have to do a factory reset just to get the thing to boot again. This has never happened with any of the PC sysex librarians that I've used with the A6. Even if I could get it to work, Sysex Librarian is very simplistic compared to programs like A6 Banker or A6 Librarian. So (accepting that Live doesn't play nice with sysex), what can I use as an alternative to Sysex Librarian? It would be great to find something that will let me rename and reorganize patches on the Mac.

I've searched quite a bit and can't find anything that does this. Any DAW that can record and playback sysex will work for this. Reaper comes to mind as a cheap alternative to SysEx Librarian. 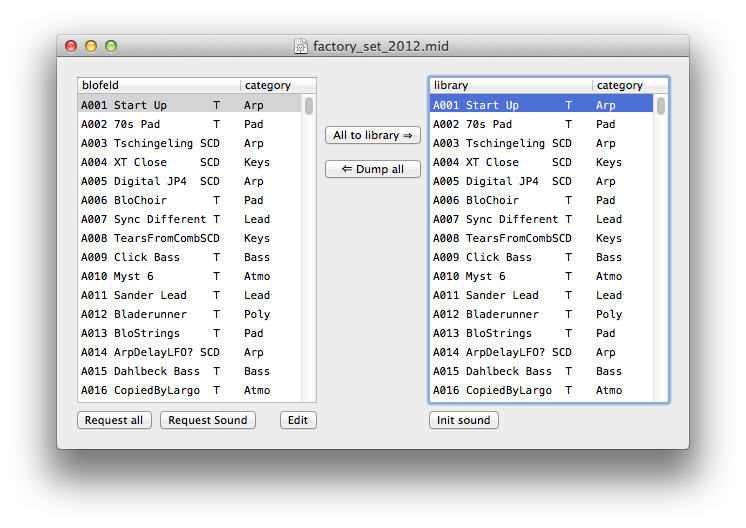 I don't know about something like Audacity (free DAW), I've never used it. I have to wonder though if there isn't some other issue, like perhaps with your MIDI interface or some such.

I've been using SysEx librarian for something like six years to manage bank dumps on various hardware synthesizers, and I've never run into an issue with it. I make and restore Virus TI dumps with it, and they are quite large.

'Course, it's possible that there's a bug I simply haven't run into, but I'm surprised because it has been rock solid for me.Luddy. Thanks for the replies. I guess I'll try to further troubleshoot Sysex Librarian or try using C6. I talked to the developer and he was nice.

Although he said it was probably just a hardware issue. MIDI Monitor didn't show anything amiss. Looks like neither of these apps support renaming or reordering patches within a user bank though. I'm a bit surprised at the lack of software for doing this. It's really a shame that each synth manufacturer doesn't make simple utilities like this.

Maybe Unisyn or Soundquest will do the trick. Anybody used MIDI Quest? It actually supports all the hardware synths that I have (though it's just a librarian for the A6, no editor). Thanks for the responses. I think I've narrowed the issue down to the Mac drivers for my Impact Twin MIDI interface.

Everything works fine on the PC. But strangely, I can use C6 or Sysex Librarian to communicate with my other synths, no problem.

So it's some issue where the Andromeda and the Impact Twin aren't getting along. The weird thing is that either C6 or Sysex Librarian can receive Andromeda patches without issues, but sending patches (banks or single programs) from either app consistenly locks up the synth. The Andromeda is dead tech to Alesis, so hopefully TC Electronic support will come up with something. It took a while to eliminate cables, etc as the issue but I'm pretty sure it's the Mac drivers for the Impact Twin.