Posted: 26 November Don't really like it. There is a lot of backtracking. Everything gets a little bit samey, the whole game being set in Egypt.

I mean the yellow-red-brownish color palette gets really tired after the first 3 hours and 7 hours later it seemed like things weren't going to change anytime soon, so I'm kind of losing interest. A lot of things also aren't very clear and make little sense. For example I was stuck for a very long time and after checking a walkthrough it seemed there was a door I had to shoot to break it. When I first encountered this door, I tried to open it and quickly disregarded it because it was locked, and no other door in the game could be shot open. But apparently this one could be shot open. Tomb Raider: The Last Revelation is the fourth instalment in the Tomb Raider video game series. It was developed by Core Design and published by Eidos Interactive. It was released on PlayStation, Microsoft Windows and on the Dreamcast with exclusive graphical and sound enhancements.

How was I supposed to know that? Also enemies are really stupid.

There are for example guys who can deflect your bullets by slowly swinging their swords around. They're not hard, but it's just stupid. Bodies magically disappear. In the older games they stayed around. Little things that just really bug me. 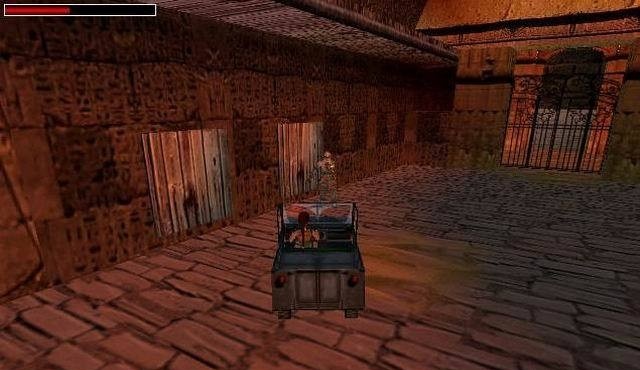 I might pick up the game later, but for now I really can't take this anymore. The open world design just doesn't work if you have to backtrack miles because you missed the one door that for some strange reason can be shot open. I really loved TR1-3, but this?

Start in CITY OF THE DEAD. Explore all except the area with the second secret. (You need the nitro to jump the motorcycle across the deep pit.) Go to the CHAMBERS OF TULUN ( #1 in diagram). Explore TULUN.

You can't get the ROOF KEY yet (need nitro). Go to CITADEL GATE ( 2). Explore CITADEL GATE. Get the clues for the mission from Sgt. Pick up the NITROUS OXIDE CANISTER. Return through TULUN ( 3) to the TRENCHES ( 4).

Attach to motorcycle for turbo power to jump larger gaps.) Return through TULUN ( 5) to CITY OF THE DEAD ( 6) to get the second secret in that level. (Need nitro to jump the pit.) Return to TULUN again ( 7) to get the ROOF KEY (Need nitro to jump to the building where the key is located.). Return to the TRENCHES ( 8) with the ROOF KEY to finish that level.

Go to the STREET BAZAAR ( 9). Get the MINE DETONATOR BODY and MINE POSITION DATA. Return to the TRENCHES ( 10).

Blow up the mines using the MINE DETONATOR BODY and MINE POSITION DATA. (Note that this exit from the STREET BAZAAR is different from where you first entered from the TRENCHES.) After blowing the mines, proceed directly from the mined area of the TRENCHES to the CITADEL GATE ( 11), through a different entrance than the one from TULUN. Return with the WEAPON CODE KEY to Sgt. Azizus in the CITADEL GATE level to finish that level. Popcorn 3 software for mac mac. After the final cut scene, you will be in the CITADEL ( 12), the last level in Cairo.

(. NOTE: It is possible to complete the second half of the TRENCHES without the ROOF KEY, in which case you can skip the section of the CHAMBERS OF TULUN level where you find it. See the walkthroughs for those levels.). Use your browser's 'back' button to return to the last page you viewed. Or, click to return to the.

Copyright © 1999- Stellalune. Special thanks are given to the participants in the alt.games.tombraider newsgroup, without whom some parts of this walkthrough couldn't have been written.

Feel free to copy or print this walkthrough for personal use. By all means, share it with friends, but please include this credit line so people can send me their feedback.

No part of this walkthrough may be reproduced on another site without permission. Stella's Tomb Raider Site:.